On a warm but cloudy and showery day on top of the world at Bridport GC the County Adult / Junior Foursomes got under way with a very good field of some 46 pairs from Bridport, Dudsbury, Canford School, Broadstone, Ferndown, Canford Magna and the ever present Weymouth, as for the other 26 clubs in Dorset we hope to see representation from your club at next years event.  Geoff cotton and Martin & James

Players did not find the scoring overly easy except perhaps early club house leaders Simon Butler & James Lee from Canford School who came home with a very respectful 37 points, then came father and son pair Martin and James Chapman with 38 points to hold the club house lead.  More 37 point scores came in from Dudsbury pairings of Andy Parsons, Brad Aspin along with Darren & Callum Bushby.  Simon & James held on to second place on count back until another Dudsbury father and son pairing of Billy and Jake Younger came in with 38 points taking second place but losing on count back to the Broadstone pair thus Martin and James received the Bunny Cotton Memorial Trophy. 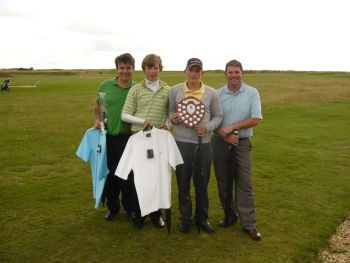 Dudsbury 'D'Dudsbury teams again cleaned up on the team shield with Dudsbury ‘A’ having a total of 72 points losing out to the 75 point haul of the all father and son Dudsbury ‘D’ team consisting of Darren & Callum Bushby, Billy & Jake Younger along with Paul & Mike Wyeth (who sadly left prior to the presentation) congratulations to all the players for taking part this year and making the event such a success.