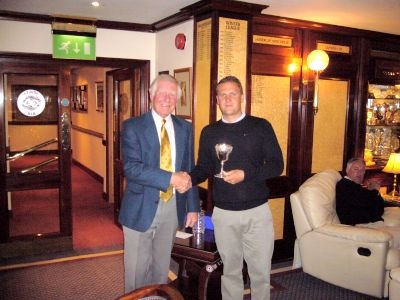 In a strong field light winds and with plenty of sunshine not usual for this event the 2009 Dorset Scratch Open got under way for the Hillamsland Trophy.  The morning round saw scoring to be hard with players not coping well with the greens, Weymouth player Pete Corrick got the best out of the morning with a sound 73 one shot ahead of a jet lagged David Norton who had 74 and was five over after three.  Back on 75 were several players including Ben Harvey and David Cook.  The afternoon saw the scoring getting better withBen Harvey early starter David Cook setting the pace with a 72 and a 147 total.  Joe Bland and Darryl McMahon came home in level par, sadly for David Norton the jet lag got worse.  Club house leader David Cook could only look on as rumours came in that  Ben Harvey was 3 under after 10 he eventually came in with a stunning 67 equalling the course record, giving Ben the title by a clear 5 shots and his name goes on the trophy for the second time.  Our thanks go to the Club Captain Basil Beeching for presenting the prizes along with all the staff at Dudsbury GC for there hard work to ensure the event was such a success the course was in excellent condition as always for this time of year.