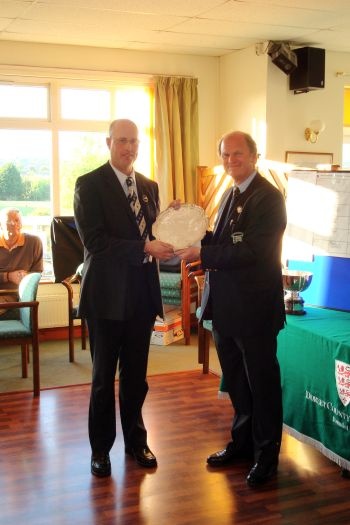 Weymouth celebrating its Centenary hosted the 2009 County Championships and with the sun shining down the 36 hole Stroke Play competition got under way, the pressure was on the home players to play well and in the morning they didn’t disappoint and early starter Peter Corrick led the way with a 3 over total of 73 this was followed in by Calvin Drage with a superb 3 under par 67.  David Cook from Parkstone who are also celebrating there Centenary came home 1 under to give it a Weymouth and Parkstone 1 & 2. The Weymouth youngsters Jon Welch level par and Robbie Mabb 1 under on 69 kept the home club well up on the leader board and 10 shots clear in the team cup competition.  Last years Champion Tim Adams ruled his defence of the title out by failing to return a score in the morning round losing his ball on the last.

So as the wind got a little stronger the afternoon round got under way and the local players seemed to struggle a little more than the visitors.  Pete Corrick was some four shots worse than his morning round and Calvin hung on to come home in 74 giving him a 141 total and the club house lead.  David Cook Garrett Winner 09The ever impressive David Cook came home with a 2 under 68 and a 137 3 under total to take the lead.  Jon Welch struggled along with young Robbie who sadly fell away towards the end.  Dan Smith back from the USA put in a tremendous final round of 69 to give him a 142 total and third place.  In the team event things could not be tighter as David Norton came home with a 72 and this put the two Centenary Clubs level and we awaited the card of Tim Adams as we were down to the wire and making amends for his poor morning he came home with a 71 thus giving Parkstone the Team Cup by just one shot.  The club go forward to North Hants GC to represent the County at the National Finals in September. 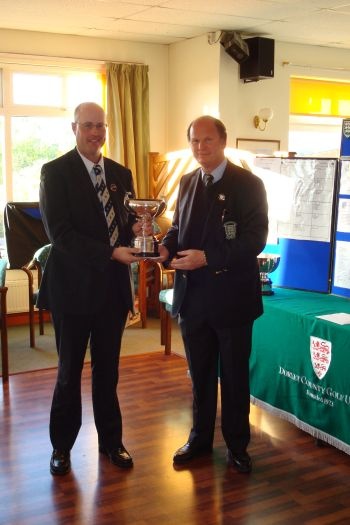 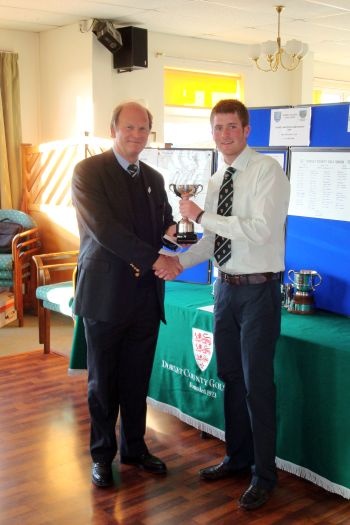 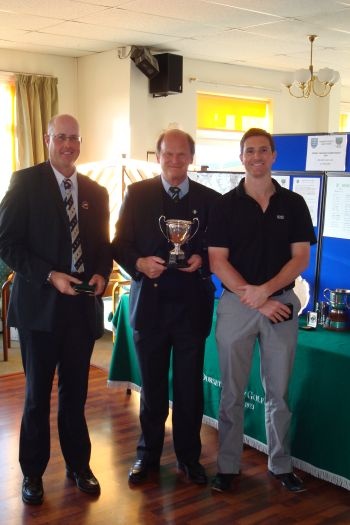 Saturday saw the 16 Qualifiers get the matchplay phase under way to find the 2009 County Champion with the weather forecast being for a very hot weekend the golf was not to disappoint with some great matches and some fine golf being played. The ever consistent David Cook disposed of local Henry Hope 4&3 the next match between young Dan Hannaford and Andy Horn went all the way to the last with Andy just coming out on top.  Match o f the round had to be Andrew Windsor versus David Norton which saw Andrew go 3 up by eight to come back over the road to fourteen 1 down and that’s how it finished on the eighteenth.  Old head Dave Barton against young gun Corey Coshan saw the old head winning 5&4.  Calvin won the local derby with Pete Corrick 3&2 Matt Walker lost one down to a very determined Tom Leech.  Dan Smith saw off Darryl McMahon 2&1 and Jon Welch came home 2 up against young Harry Shaw.

The afternoon saw an early finish for David Cook as he disposed of an out of sorts Andy Horn 8&7 and his Parkstone team mate David Norton saw off Dave Barton 5&4 to set up an all Parkstone Semi final. The next two matches saw some stunning golf from all players as the two Weymouth players tried to set up an all Weymouth Semi final sadly Tom Leech was having none of it and he stayed focused against Calvin and his supporters to win 3&2 leaving Dan Smith and local lad Jon Welch Battling it out for the final spot it was nip and tuck all the way with holes being halved with birdies and as we came to the last there was nothing in it after Dan hit the flag in two on seventeen to see his putt just miss to keep it all square.  Dan drove first on the eighteenth and with a tail wind over cooked it and saw it fly into the rough and trees through the fairway and even though the ball was found the penalty shot left Jon to get his par and take the match by one. 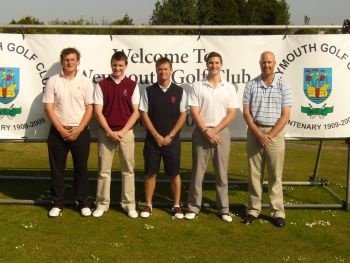 So to Sunday and the Semi-Finals, The two David’s set off and Cookie soon took the lead and by eight was three up, Dave Norton had been here before and promptly won nine and was soon back to only one down sadly he tweaked one into the bushes on sixteen but then promptly got it back to one by winning seventeen to come down the last 1 down, the experience of both players showed and David Cook held on to make the final.

Tom Leech hit Jon Welch with a birdie blitz at the second and third won the fourth with par to take a 3 hole lead.  Tom won the tenth to go four up and looked like spoiling the party of a Parkstone Weymouth Final.  Jon then won the eleventh and an unfortunate lie on the fairway for Tom on thirteen brought the score back to 2 down and then Jon hit Tom with two birdies on fourteen and fifteen to level the match, Tom then put his drive into the trees on sixteen and Jon was one up seventeen was halved and they came to the eighteenth Tom’s drive was in perfect finding the middle of the fairway and Jon was just short of the fairway in the semi rough.  Tom then hit the shot of the match so far to with in 6 inches for a three and with Jon just missing his putt it was to the first for extra holes.  Tom took an iron and putt it in the fairway Jon followed and eyebrows were raised as he took out his driver with a large gallery he did not disappoint as he putt his tee shot onto the green to secure a birdie and the match. 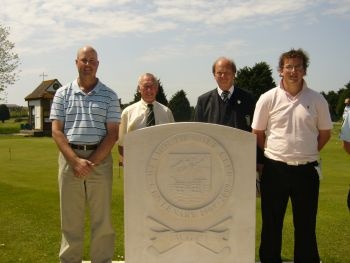 So here we are,  David Cook Parkstone versus Jon Welch Weymouth a County Championship Final were both clubs are in their Centenary year and both designed by James Braid one could not have scripted this at the start of the weekend.  It was going to be a hard battle for Jon but he did have support on his side, the first was a good halve for Jon and he then lost the second to a Dave Cook birdie which was followed  with another birdie at the fourth to go two up.  The next two holes were halved in par before Jon found trouble on the seventh to go 3 down.  Both players made par on the eighth, David found the semi with his drive down nine with Jon hitting long and finding the middle of the fairway setting him up for a birdie and bringing it back to 2 he followed this with anther birdie on the tenth possibly the first time he had found the green from the tee during the weekend, giving the crowd a chance to give some vocal encouragement.  David did respond with a fine birdie at the eleventh to go two up.  The twelve was halved before Jon over cooked his shot into the thirteenth to leave him an impossible chip to get near to the pin allowing David to regain his 3 hole.  Jon responded again with a fine birdie at the Fourteenth to bring it back to 2 and he just missed his birdie attempt at the shot fifteenth.  The tee shot at sixteen was slightly tweaked and found the bushes down the right so it was three off the tee and the writing was on the wall and by the time we reached the green and finished putting David Cook had won 3&2 becoming the Dorset County Champion for the second time, it should also be noted that at no time during the match play phase was he ever behind in a match.  As for Jon he will be back and if he keeps playing like this will be champion one day. 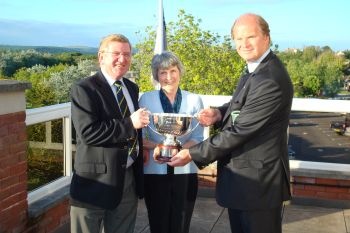 The County also took the opportunity to present the club with a trophy in memory of Jack Roberts County Junior Secretary who passed away earlier this year, the trophy will form the Scratch part of the Jubilee Cup and it is hoped all players that knew Jack will make the effort to enter and try to win this cup in his memory.

Lastly on behalf of the Dorset Golf Union a thank you to the Club Committee, Members and staff for allowing us the use of the course for the 2009 Amateur Championship.  The course was presented by the staff in excellent condition and proved a good test of golf for all players concerned, the committee, club members and staff have been a delight making all the players and officials very welcome. Thank you.