6 September saw Peter Alliss Present the trophies to this years winner Oliver Stocks from Canford Magna along with the Runner up Tom Murphy, he also took the time to present the new trophy to the first Girls winner Haley Davis. 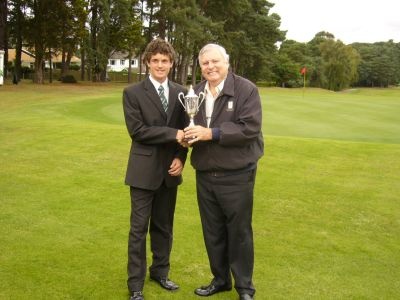 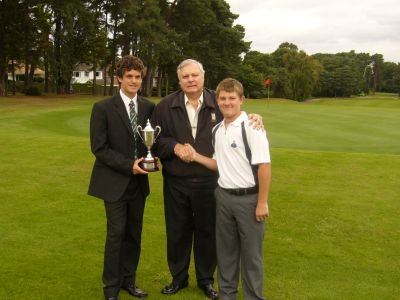 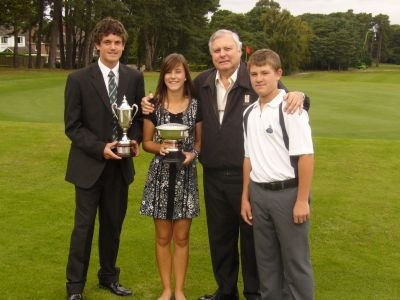 Round One:  On a very overcast and cold morning the 8 matches in the first round got under way, Oliver Stocks Canford and Oscar Perry Sturminster got us under way Oliver giving 7 shots was comfortable for most of the match and ran out with a 3&1 win. Broadstone’s Ryan Warrener then took on local lad Spencer Rumble and giving some 8 shots managed a fine 2&1 win with some splendid match play golf.  Jack Fairhall now at Canford disposed of an out of sorts Nathan Lake Broadstone 6&5.  The match of the morning was the two big guns Christopher Evans Ferndown versus Jordan Howlett Broadstone the match swung both ways in the early stages but Jordan’s rub of the green, as they say, saw him home 3&2.  Joe Lovery Yeovil giving 5 shots had to fight very hard against Alex Shenton Broadstone who never gave up and took the match all the way finally losing out by one hole.  The Broadstone pair of Jon Brunnock and Cameron Groat had a real tussle Jon was 4 down at one stage and then got it back and had a chance to take it to extra holes but his putt on the last slipped past the hole leaving Cameron the chance of a halve which he did and a 1 hole victory.  Tom Murphy Crane valley finally got over his demon of always going out in the first round by taking the scalp of Dudsbury boy Harry Rickman 2&1. Harry Willsher Canford and George Davis Ferndown had a very good match again going both ways in the early stages before harry came out on top and took the match 2&1.

Round 2 got under way with the sun starting to peak through but still a cold wind and the golf was again of a high standard Oliver having had to give shots in the morning received 10 shots in the afternoon and played some splendid golf over poor Ryan, Oliver was only two over as he closed the match 8&6.  Jordan was just to long for jack and even with the shots struggled to stay with him and Jordan took the match 5&4.  The match of the after noon was between Joe Lovery and Cameron Groat, Joe was 1 up after 6 and by the end of the ninth was 1 down.  By the end of the fifteenth Cameron was 2 up with three to play and Joe then showed some true grit and won the next three to win the match 1 up.  Tom Murphy can now celebrate as he gained his second win by beating harry 5&4 in a very friendly but keenly competitive match.

Well done to all the boys who took part today the golf was of a very high standard and all matches were played in a great spirit.  Spectators are more than welcome for tomorrow’s semi final’s and final. 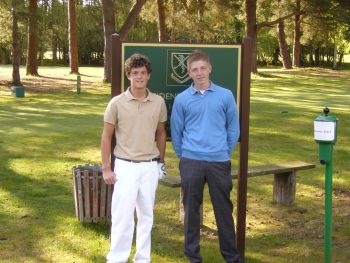 The first semi final was contested between Oliver Stocks and Jordan Howlett with Jordan giving eleven shots, after a scrappy start Oliver took control of the match taking full advantage of the shots being given to run out with a comfortable win 6&5 and book his place in this year’s final.

The second semi saw Joseph Lovery take on Tom Murphy, Tom was receiving 7 shots it was clear from the way Tom started he meant business playing some great golf and the shots being given were really secondary as he began to build up a commanding lead, the result was soon never in doubt as he sealed victory on the twelve to secure a 7&6 win to set up a cracking final with Oliver. 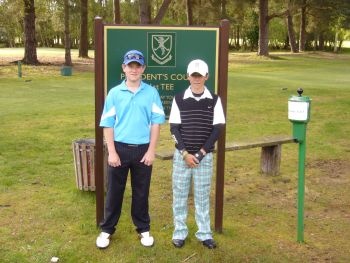 Third & Fourth Place Playoff: was contested by Jordan and Joseph and it was a see-saw battle with Joe taking the lead on the fourth, Jordan immediately hit back winning the next three to go two up at the turn.  Joe won the tenth and then promptly lost the eleventh to remain two down, then Joe produced some inspired golf as he went Birdie, Birdie, Par and Birdie leaving poor Jordan wondering just what had hit him, Jordan sadly then stuck his approach to the seventeenth into the bushes on the left and that was that, Joe took third spot 3&1. 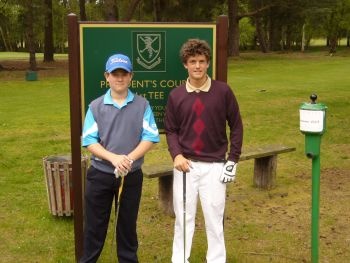 With little to choose between these two and with both having played superb golf to Final 09.jpgreach the final we got under way with first blood going to Oliver as Toms par putt just slipped by the hole, both found the ditch off the second but Tom made an excellent up and down to square the match. The third was halved and Oliver went back to one up with a shot on the par five fourth making it two with a very good par at the fifth.  Two good pars saw a half on six, On seven Oliver hit a poor drive but Tom hit a cracker, Oliver missed the green right and unfortunately for Tom he flirted with and ended up in the bunker, he  sadly failed to get out first time thus allowing Oliver off the hook to win the hole, they both had fives on the eighth but Oliver had a shot to go four up.  The ninth and tenth were halved with par’s.  Tom won the eleventh with a par and then followed this up with a birdie on twelve, the fight back was on, Oliver held his nerve as he had a shot down thirteen and as they both had good pars his lead was back to three.  With a slip in concentration by Tom on the fourteenth the lead was back to four.  Tom to his credit fought hard and won the fifteenth sadly for Tom a flyer out of the semi on his approach to sixteen saw his ball shoot out the back and with Oliver hitting the middle of the green the game came to and end and Oliver ran out winner 3&2 to become the 2009 Peter Alliss Young Masters Champion.  This was a keenly contested match and our congratulations to Oliver and commiserations to Tom.  The match like all the matches was played in a great spirit upholding the traditions of this great game. 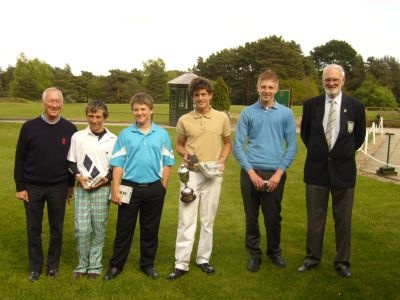 On a bright sunny morning and one of the warmest days of the year so far the forth and last round of the Alliss Masters got under way with places in the OOM still open for grabs. Young Spencer Rumble Ferndown with 45 points playing on his previous home track just pipped Joseph Lovery from Yeovil on count back.  Chris Evans Ferndown and young George Carroll from DG&CC came in third with 41 points each, sadly for George it was just a couple of points short from getting him into the top 16 and the match play stage.

Final standings in the Alliss OOM

On a nice bright day the postponed third round of the Alliss Young Masters got under way. Playing the Woodland and Lakeland course at Dorset Golf & Country Club the scoring was once more of a high standard with Broadstone youngster Cameron Groat taking the honours on 48 points followed by Canfords Oliver Stocks on 40 points, needless to say the next time we meet at Knighton Heath in a fortnight they will be off a reduced handicap!

Alliss OOM after round 3

On a very wet cold and miserable day the second round of the Alliss Young masters got under way at a very well presented Canford School Course the first time the County has taken an event to the club.  With the rain pounding and a very cold wind blowing the committee took the reluctant decision to curtail the event to a nine hole competition with 18 points being awarded to each player for the back nine, young Harry Mann & Tom Murphy lead the way both having very creditable 18 points for the front nine.  Our thanks must go to the members of the club who gave of there time to ball spot, provide assistance and to ensure both players and parents were kept warm with hot drinks.  Results can be found by viewing the OOM below.

On a wet and miserable morning the first round of the Alliss Young masters got under way on the Old course at Yeovil, once again the club has done the County proud with a course in excellent condition despite the weather.  The scoring was slightly better by the late starters who had only the tail end of the rain, that said all boys got round and the scoring was very good overall.  Young Oliver Stocks had the round of the day with an excellent 44 points closely followed by home grown youngster Noel Campbell-Hunter on 41.  Congratulations to all the boys for getting round.