Match report:  A windy day with a promise of rain but a course in good condition. This was the second of our joint matches with the full junior squad. They began their foursomes first with the U14s following with 11 holes to play. It turned out to be an excellent start with the boys winning 3 matches out of the four, with two going very close.

Match report:  True to its name Windwhistle was very blustery with strong westerly’s blowing. Heavy rain struck in the afternoon, thankfully not for long. With lush turf and quick small greens and seriously rolling countryside the course presented a stern test for the boys.

Match report: The match was played at Dunwood Manor GC on a very wet day with a course nearly at saturation point due to other events this match was singles only and given our boys had not played the course previously they did extremely well under the conditions.

Match report: The match was played at Lyme Regis GC which was in fine condition as was the weather. The format was 9 holes of foursomes which saw the Dorset side clean sweep taking all four points this was followed by 8 single matches were we saw a very strong fight back by Cornwall to just sneak the win by one point. 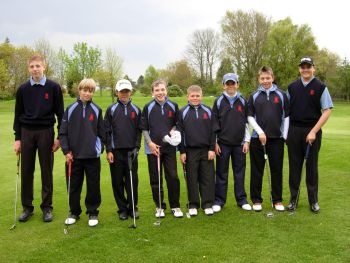