Due to a poor run of recent results the 7 days of the South West Week were used to develop some younger players as well as compete. The Players commitment to personal development ensured that by the end of the week we were able to compete effectively and successfully.

As a team, we agreed a Mission Statement based around:

The week’s main objectives were:

If, at the beginning of the week, we had known we needed to win twice to avoid the wooden spoon it would have appeared to be a daunting task.

Every day we took each session of singles/foursomes on its own merit focusing on what had gone well and what could be done better.

Days 1 and 2 had a similar pattern; we won the singles sessions against Somerset and Wiltshire, however lost both foursomes 4-0.   (Somerset result)

As a team we discussed the development to-date and agreed Day 2’s foursomes vs Wilts was an improvement as 3 matches were taken to the last hole. (Wiltshire result)

Day 3 STROKE PLAY  We will not be in the races for any SW Stroke Play Championship until we have more players playing in national events. Wiltshire’s success is due to having a number of full time players enjoying International experience. This will be a major focus for the Dorset Squad during the coming off-season.

We created an internal ‘Dads vs Kids’ 6 v 6 Stroke Play Competition which resulted in the Kids winning by 14 shots. This result did not go un-noticed. Team results

Day 4 of the match play came after a long day of 36 holes stroke play. We struggled to pick up momentum vs Devon. In the singles we lost comprehensively however our focus on the foursomes with some fresh pairings enabled to half the session 2 all.

At this point of the week, we had not won any overall matches even though we had won 2 sessions, lost 3, and halved 1.  (Devon result)

Day 5 Going into the ‘wooden spoon’ match vs Cornwall, we had added incentive following Cornwall’s “it’s only Dorset” comment from previous years. This time, we managed to win both sessions. The singles 4.5 / 3.5 and the foursomes 2.5 / 1.5. We were delighted to taste our first victory since 2006.    (Cornwall result)

Day 6 Going into the final day, momentum was strong within the team. However, Cornwall beating Devon meant we needed to be ‘masters of our own destiny’ by beating Gloucestershire. This was not going to be an easy task as they were still in the running for winning the Championship.  In the morning, we finished the singles 3.5 / 4.5 down. At this stage of the week, energy and concentration levels were starting to run very low. The script for the afternoon could not have been written. The Dorset men needed 2.5 / 1.5 in our favour to avoid the dreaded ‘wooden spoon’. Going through 9 holes, we found ourselves 2, 3 and 4 up with only 1 match down. Gloucestershire fought back and suddenly we were only up in 1 match and halving 2. Fortunately, Joy/Coshan closed out their match against Gloucester’s best pairing 2 and 1. Virtually at the same time, Garwood heroically sunk a 4ft putt for a half at the 18th. This left Adams and Windsor 2 up with 2 holes to play. We needed a win!  The opposition won the 17th with an excellent birdie. Anything could happen at the 18th and it did! Windsor played a very cool approach shot to 20ft with the opposition 30ft away. Gloucestershire’s putt lipped out leaving Dorset with 2 putts to win. How appropriate Dorset’s County Champion, Tim Adams sunk the putt for a birdie to condemn Cornwall to receiving the wooden spoon.  (Gloucestershire result)

We were delighted that our week’s development and objectives had been achieved. However, we recognize that we have much work to do to meet the current achievements of Wiltshire. The planning and preparation for SW Week 09 has already begun.

I cannot thank the Players enough for their commitment and energy which gained them the rewards they justly deserved. It was a special moment at the 18th on Friday we will feed of that to gain future success. 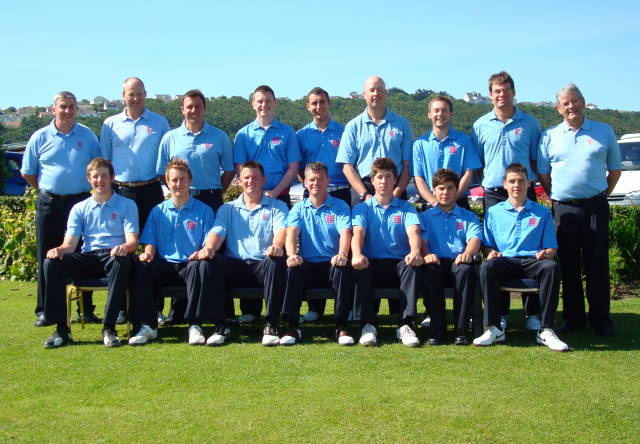