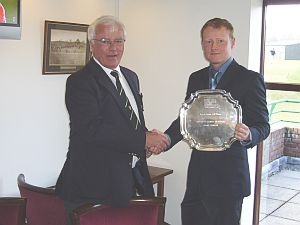 Match report: With an aggregated total of 230 and a final round of 78 saw Daniel Hannaford hold on to pip his club rival Rob Cunningham by one shot to take the Keith Durbin Salver in this years Henderson competition. Daniel had 77 75 and 78 for his final total 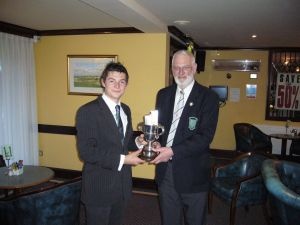 Match report: After one and a half days hard fought match play which saw the semi finals halted due to the heavy rain meaning the final had to be carried over to the Saturday.  There was some very fine match play despite the conditions and the semi finals saw Clinton beat Luke Gough on the last holing a 20 foot plus putt from just off the green with Luke looking favourite to take the match to extra holes.  The other Semi saw the vastly improving Rob Cunningham from Ferndown beat an indifferent Cory Coshan 2 and 1.  Henderson Matchplay Winner1.jpgThe final put back to the Saturday got under way in conditions that were not conducive to good golf but credit to both boys that some exceptional golf was seen by the small contingent of supporters, Clinton being down for most of the match came back strongly to towards the end getting the match back all square coming up the eighteenth, Clinton was the first to hole ensuring his par and leaving Rob with a six foot putt to take the match down the nineteenth, unfortunately he missed and Clinton Norris became the Henderson Trophy Winner for 2008 continuing the good form that took him and his Knighton Heath team mates to the English Finals of the Junior Team Championship well done.

The picture below shows the runner up Rob Cunningham pipped in to second for both events. He was heard to say he will be there next year to take both trophies! 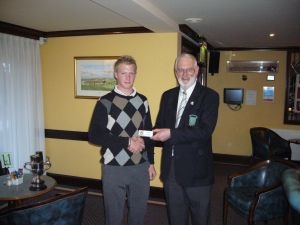 On a very clod crisp but sunny morning the third round of the Henderson got under way, the scoring was not as good as the weather would have you believe was possible and the spoils were taken by John Milne Highcliffe with a hard fought 76.  He was followed by Tom Robson and Rob Cunningham both with 78's although Tom may ponder on his 8 at 14!  The scene is now set for a tight fourth round as some of the stars need to score well to make the last 16.

On a dull, overcast and breezy morning after the Christmas Holiday the entrants for round two of the Henderson Trophy got under way, scoring was difficult with the wind picking up, but great credit to Clinton Norris from Kighton Heath who posted the days best gross score of 74, this was closely followed by Luke Gough and Daniel Hannaford both from Ferndown with gross 75's. For the full result sheet see below.

On cool and breezy morning awaited this years entrants competing for the Henderson Trophy.  With a small entry of 27 players the early starters set the pace with young up and coming Scott Heap leading the way with a good 74, his playing partner Corey Coshan tripled on the last to finish on 75.  There followed some reasonable scores but no one came in with a lower score.  For the full result sheet see below.