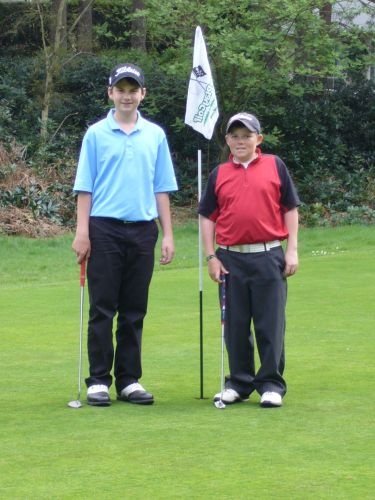 The Final stages of the Peter Alliss Young Masters got under way on Sunday 27 April with the semi finals getting under way at Ferndown GC on the President’s course, and after only two holes these were rudely interrupted by a severe lightning and thunderstorm.  Tom Parsons (12) had a real scrap with Billy-Joe Bugden (8) in the first semi-final and eventually ran out with a 3&2 win.  Sadly in the last few holes Billy-Joe slipped and hurt his back thus ruling him out of the play-off for 3rd and 4th place.

The other semi-final saw two cousin’s play - Jonathan (14) and Fraser (9) Dawson.  Fraser pulled off a one hole win after some excellent fighting play from Jonathan who at one stage was five down.  Well done to all boys for some splendid golf and commiserations to the two losing semi-finalists.

After a hearty lunch the final got under way between PAYM FinalistsTom Parsons and Fraser Dawson.  Tom got into the match quickly and ran up a string of excellent holes to set up a 5 hole margin after 7 holes.  Fraser then had a stern talk to himself and launched a counter-attack, and by hole 11 was only 3 down and by the time he stood on the seventeenth tee he had closed the gap to one. Though Fraser frequently out-drove his opponent he did suffer the occasional hook which is exactly what he suffered with his second shot into the tricky par 5 seventeenth green.  A good recovery narrowly missed the green and with Tom’s third hitting the green some 22 feet from the hole left Fraser with a chip and run that either had to go in or be stone dead.  Sadly for Fraser he then missed his par putt leaving Tom to ensure his was close enough to be conceded for a par and securing a creditable 2 & 1 victory for the youngster.

The trophies were presented by the County Junior President, Ian Clark, along with the under 14’s Manager Mr Bill Kennedy whose tireless efforts throughout the competition ensured it went without a hitch, also .present also was the County Secretary Ian Hulse. 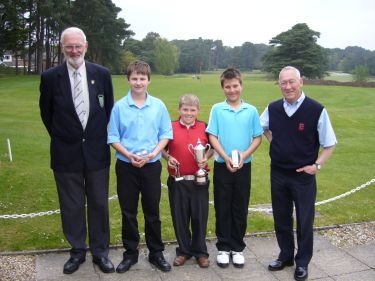 Well done to everyone for a really good Peter Alliss Young Masters competition. We saw some excellent golf and some really gritty match play in the KO stages. All credit to Tom Parsons from Dudsbury who walked off with both the top qualifier (OOM Winner) trophy and the PAYM trophy itself. The 2008/2009 competition promises to be even more exciting!!

The matchplay phase of the competition got under way on Sunday 20 April and with the sun shining the boys produced some excellent matchplay golf.  This continued in the quarter final stage during the afternoon with all but one of the matches being very tight.

The semi-finals and final will again be held at Ferndown GC next Sunday and we hope that all will come and lend support.

The tournament is held over four rounds of stroke play to be played at the various venues and dates below:

The competition comprises a round played at the four different venues above with full handicap (Max allowed is 24) and Stableford scoring.  The best three stableford scores for the four rounds will count. The top sixteen go through to compete for the Trophy in the matchplay phase.  Players will be seeded in accordance with their results from the strokeplay phase.  The matchplay matches will be played using handicap and is to be played off 3/4 of the handicap difference.

On a very wet and miserable day the first round of the Alliss Young masters got under way, with the rain pounding the committee decided to curtail the event to a nine hole competition with 18 points being awarded to each player for the back nine, young Harry Rickman from Dudsbury leads the way with an exceptional 21 points on the front nine.

With the sun shining the boys took advantage of the conditions with some fine scores being returned.  Harry Wilsher on his home club lead the way with a terrific 40 points.

We were again blessed with fine sunny weather and the boys took full advantage of the conditions to fire in some great scores with Christopher Evans (Ferndown) 42 points just pipping Tom Parsons (Dudsbury) on count back.