Glorious sunshine was the order of the day at Lyme Regis on Saturday 15th September 2007 for the Dorset County Golf Union Men?s Inter-Club Foursomes Championship with both Scratch and Handicap sections to be contested. A very well presented course with some birdie opportunities along with some high scoring chances made for an interesting days golf. 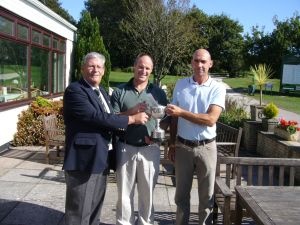 Unable to take part in last years competition John Pounder and Gary Earl from Yeovil were back to try to once more pick up the trophy and after some early fine play and a level front nine saw them lose ground on the back three with a double and single bogey before a par at the last gave them a fine 73 and the club house lead.  Last years winners Bournemouth & Meyrick Park 'pairing? Inter-Club Foursome Winnersof Tim Harty and Justin Morris played with John and Gary but could only finish with a 76. Ashley Wood pairing of Steve Sanger and Mick Cowie came home in 75.  One of last years runners up Andrew Windsor was here again hoping to go one better with Daryl Wood but a triple bogey on the tenth possibly put pay to their chances and they had to settle for Runners Up spot once more with a 74. 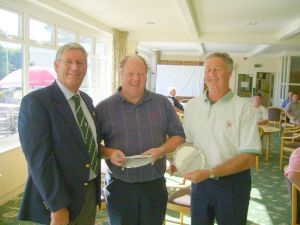 The handicap section saw some fine scores and early club house leaders were Martin Clark and Mark Staniland from Weymouth with 78 net 71. The Sherborne pair did well with a net 72 but the eventual winners came from Knighton Heath with Peter Frampton and Andrew Motley who returned an 81 net 68.5 Handicap Winnersto take the Silver Salvers.  It was a great day?s golf on a great course with superb weather it is only a pity more clubs don't take the time to put in pairs to this County Competition only 15 clubs were represented out of our 33 total! 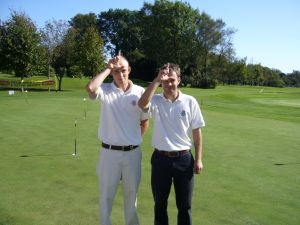